So it OBVIOUSLY is NOT summer in the city, but we were out and about in Tampa last weekend and it sure felt like it! With our friends and family up north freezing their behinds off, we made it our goal to enjoy the wonderful weather here in Tampa and spent our weekend galavanting outdoors. Saturday, we got up and made our way over to Cotanchobee Fort Brooke Park for Florida Brewer’s Guild (FBG) BEERFEST! With a friend whose birthday is always falling around beerfest in Tampa, it has become a tradition of ours to celebrate in true NHIE fashion by indulging in delicious brewskis from around the bay! 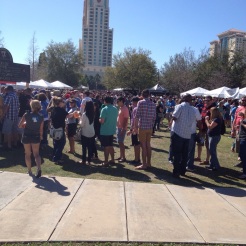 FBG definitely stepped up their game from last year’s beerfest, held in Ybor. When we got there, the line moved quick and we made our way in. When we walked into the event, we were given a small tasting cup to tote around as we sipped on the tastses of the Bay.We decided to walk all the way to the back of the event and work our way back to the entrance. There was a perfect amount of people enjoying beers and the sun was shining bright! We met up with the birthday crew and started making the rounds to take a taste from each brewery. There were over 50 different breweries involved in the event with all types of beers being offered.

FBG Beerfest was the first big event of Tampa Bay Beer Week this year. Our friend, Mayor Bob Buckhorn, was on hand to tap the keg in a ceremonious start of the week too! Check out the video we took of Mayor Buckhorn tapping the keg and the pic of him meeting Ryan and Allison!

We were so lucky to meet a bunch of great new breweries throughout South Florida. When we stopped at Big Storm Brewing Company, the guys helped us decide on our tasting and we signed their big board that they keep in the brewery from the different tasting events they attend. Here we are, leaving our NHIE Tampa Bay mark!

After stopping there, we moved on down the line and made some friends at Motorworks Brewing in Brandenton. A brewery that’s located closer to home for us, Coppertial Brewery, is set to open sometime in the next few months (fingers crossed). Located right in Ybor, off Adamo Drive, Coppertail was named after the “sea monster” that is said to live in Tampa Bay (credits to the 5 year old who thought this up). 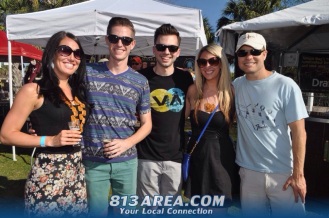 Next up, we met the guys from Miami Brewing Co, that offered two options, the more interesting being the Coconut Blonde Ale. With a taste perfect for beach weather, we are SURE this is a hit in SoBe. We continued on meeting some other people and set up a tour with a few breweries too! One we are hoping to hit REALLY soon is Southern Brewing and Winemaking located on N. Nebraska. We chatted with them and hope to plan a visit in the coming weeks (stay tuned!).

Not to fool you, but the day did NOT end there. After the event came to an end at about 6pm, the birthday girl decided to continue onwards with the celebrations by moving the fun to a new venue. With safety being a priority, we opted as a group to find a spot that we could walk to. We put our heads together and decided upon Anise Global Gastrobar. On our long walk to dinner, we made a pit stop at the most “interesting” of bars downtown, The Hub. After sipping on some libations, we tried to get a table at Anise, but it was TOO PACKED! Oh well, moving on, we set our mark on Pizza Fusion. We enjoyed a large salad and an awesome BBQ Chicken Pizza and made our way home to relax on the couch after an eventful day of fun!

On Sunday, we spent our afternoon down at Curtis Hixon Park at the Gasparilla Festival of the Arts. With another beautiful day in Tampa Bay, we roamed aisle by aisle of endless amounts of great art pieces from all over the country. Again, the event has grown tremendously since last year and we were happy to see some of our favorites from last year  return(Gasparilla Art 2013). The highlights for us were Rick Abrams, whose art was funky and colorful, Clifton Henri, a photographer with some AWESOME shots, and Lynn Whipple, whose mixed media pieces were out of this world!

After walking around and checking out all of the vendors, we headed home to relax for the rest of our Sunday Funday to gear up for the work week ahead. All in all, it was ANOTHER successful weekend out and about in Tampa Bay and just another reason to add to the list of why we LOVE our city so much!