Before the holiday craziness was in full swing, we were invited to check out Bay Harbor Hotel and Beach Bar Restaurant. These two spots are located just a few shorts minutes from South Tampa off of the Courtney Campbell Causeway.

Thanks to an invite from Bay Harbor Hotel & Beach Bar Restaurant, we had the opportunity to enjoy their amenities in exchange for some social media love and a blog post. All opinions are my own.

Lucky for us, we were not newbies to Beach Bar because we have attended one of their Sunday Night DJ Concerts, but The Bay Harbor Hotel was something new to check out. We synched up our busy schedules and locked in an early November weekend staycation to check out all that the hotel and neighboring restaurant has to offer. 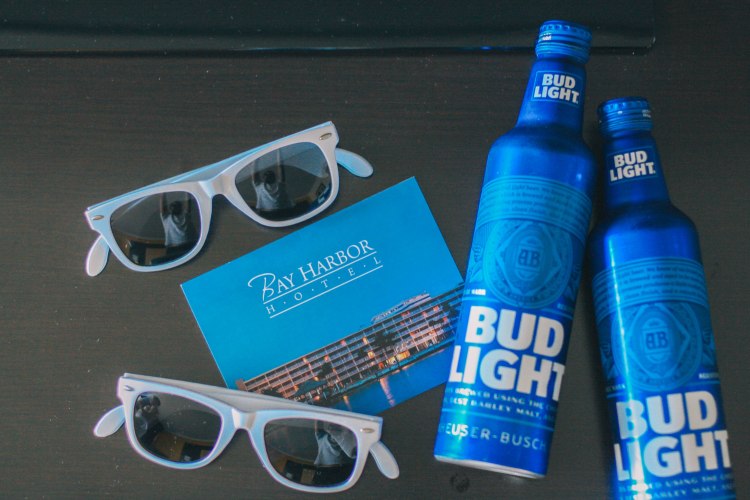 We headed over late on Friday night after an event to get settled into the room. We knew going in that the hotel was amidst construction, so walking into the lobby and seeing a bunch of new tile and caution tape was not surprising. Knowing this, we also could tell how much of an improvement the hotel was getting as a result of the construction. Rooms were being redone, balconies replaced, and just the look as a whole was getting a fresh face. And since it’s been over a month now, we are sure that the place looks even better than when we stayed. 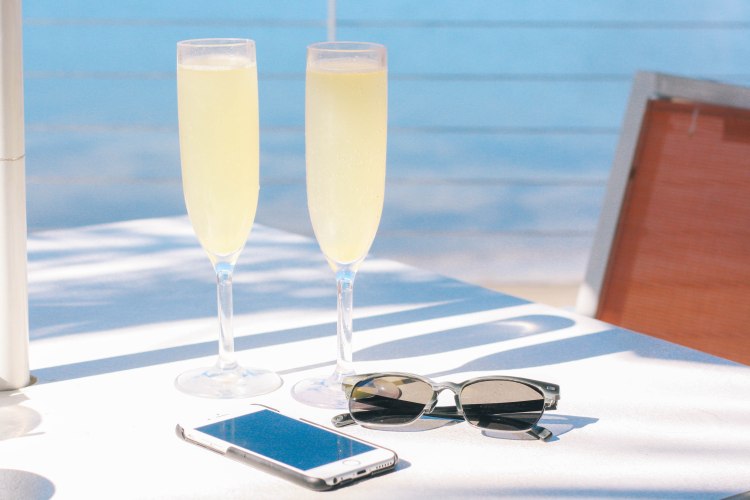 We woke up Saturday morning to a bit of a chilly start. The original plan was to Jetski right out back of the hotel at 10am, then follow that up with brunch at Beach Bar. Fortunately for us, when we walked outside and realized just how chilly it was, we rescheduled our Jetskiing to the afternoon and headed for brunch first. We found a spot in the sun, ordered up some coffee to keep warm and began looking through the menu. 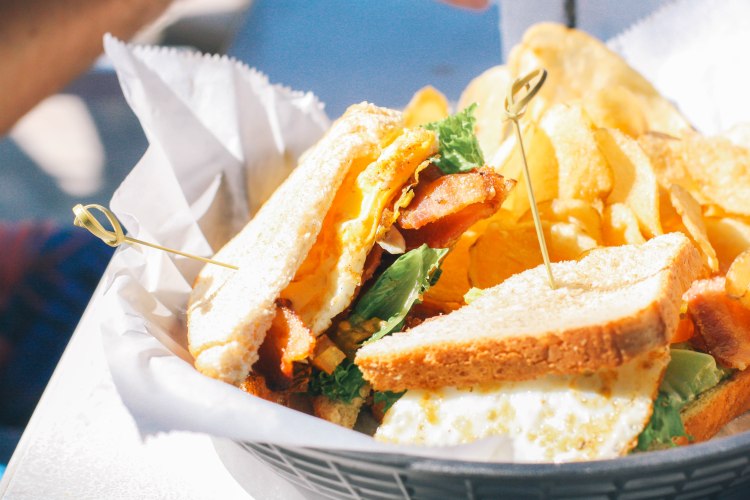 If you have followed us for a long time then you know we are not the biggest sweets for breakfast kind of guys. A typical brunch order for us includes an omelette or egg dish paired with some fresh mimosas. So when we made our decision for this meal, Ryan opted for Brown Sugar BLT (with an added fried egg) and I ordered the Crab Benedict (sub bacon for crab). 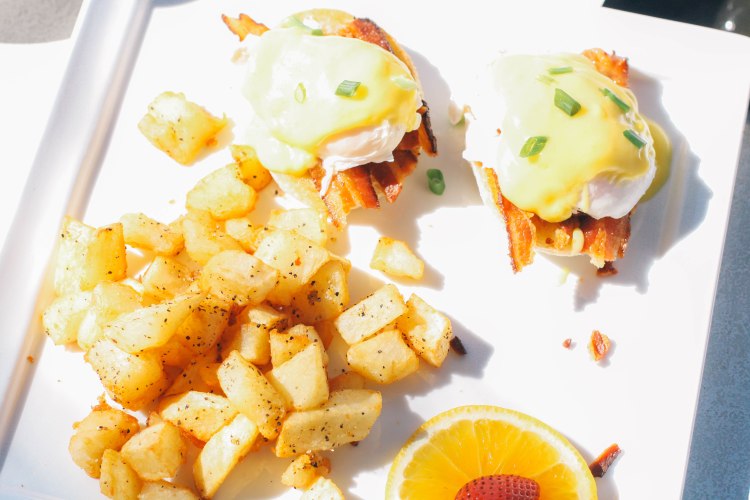 Mimosas came out and were on point followed quickly by our meal. The food was made to order and with this new menu that Beach bar has recently introduced, we were very impressed! 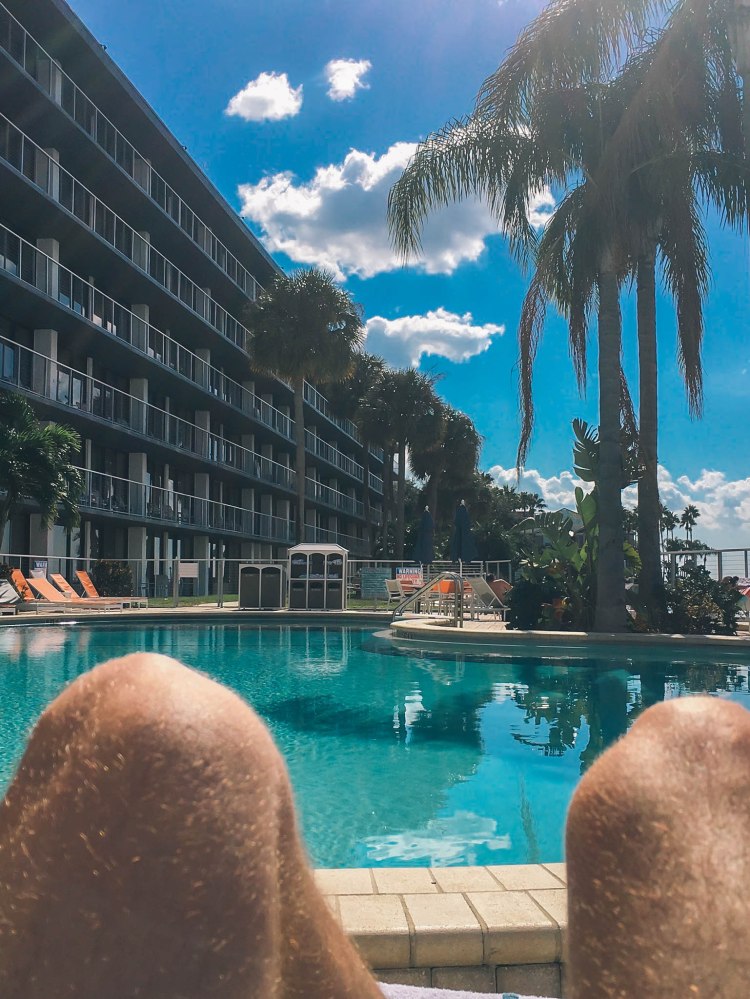 After brunch, we went to the room for a bit and sat out on our waterfront balcony to get some work done. We chatted about plans for the rest of the day and then headed to get our jetskiing on now that it had warmed up a bit. The jetski workers made life easy and got us out on the water in no time. We were so surprised once we were out in the bay at how empty the whole place was. We had the entire thing basically to ourselves. We jetskiied around for almost an hour, jumping waves and making some of our own. It was such a fun way to spend time out on the water while getting some sun too! 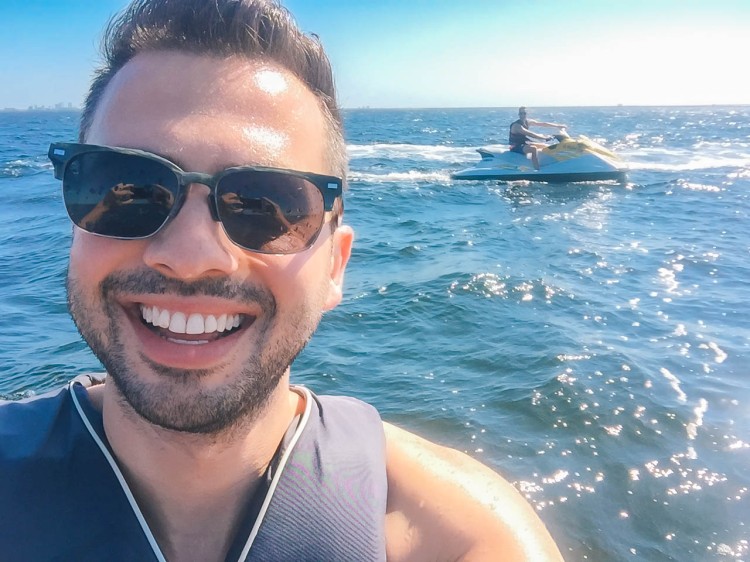 We got settled back in after all of the jetski fun and decided to head to the pool for a bit. Since it was still really sunny, we set up shop at the pool and enjoyed sunbathing and swimming for a few hours. After sunning ourselves for a while and enjoying some drinks, we headed back to get ready for the evening. 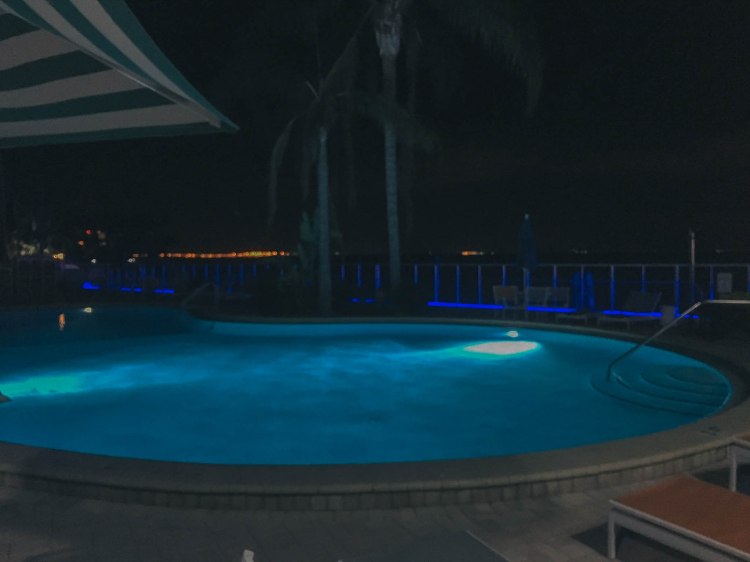 We had reservations for dinner at 7:30 at Beach Bar Restaurant next door, so we got dressed and headed that way. Again, we picked a table outside because the weather was perfect and the view of the water and sunset was perfect. We ordered some fresh tequila cocktails, The Mango Cooler and The Pineapple Margarita. Cocktails came out fast and tasted fresh, but all mine was missing was the chunks of pineapple mentioned on the menu. Don’t worry, that didn’t stop me from drinking the whole thing! 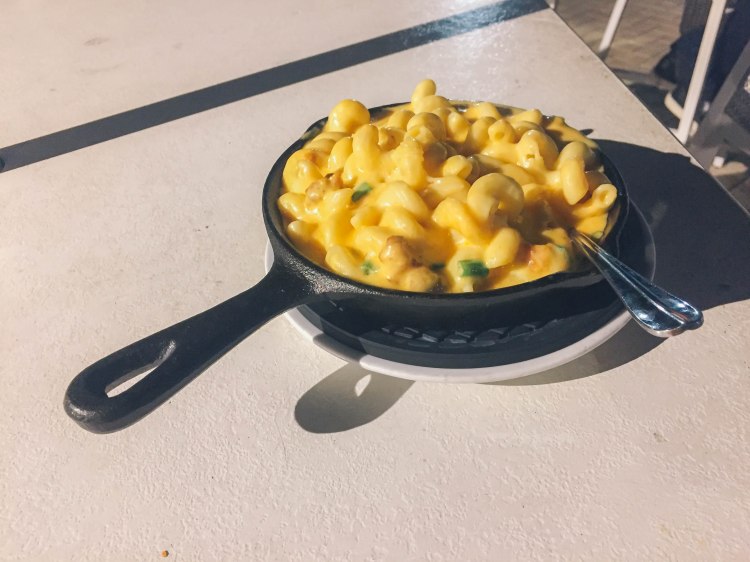 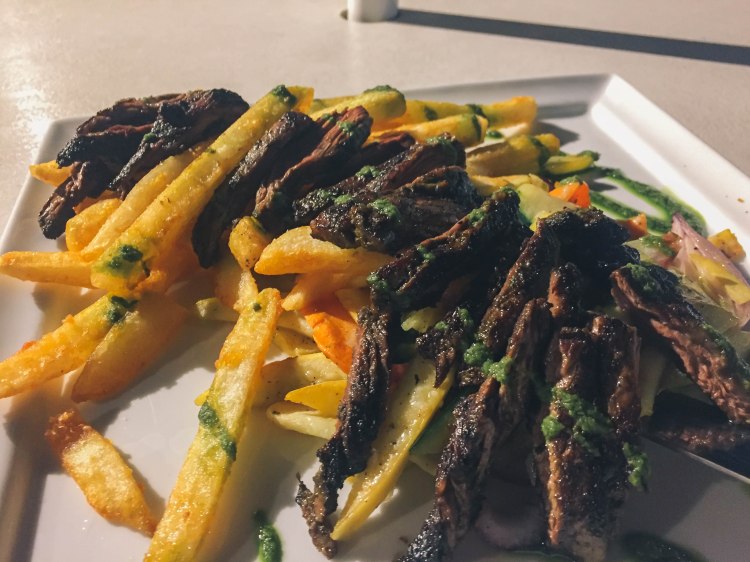 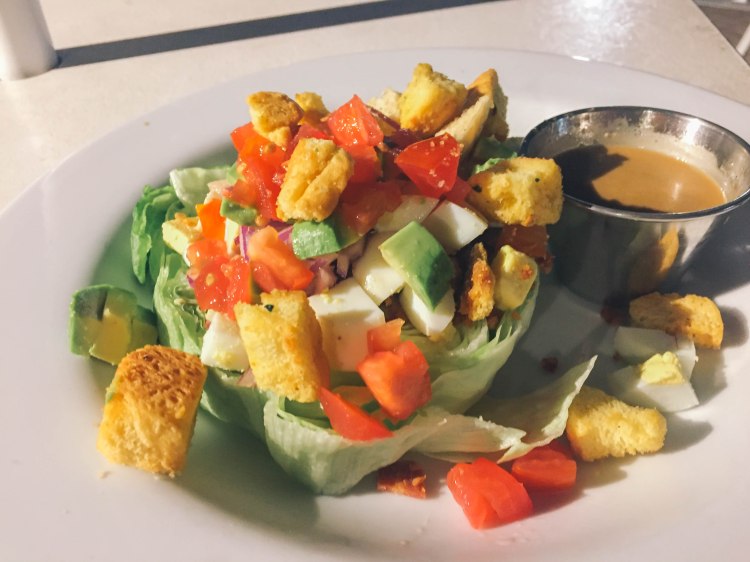 For our meal, we opted to share everything because there were so many delicious sounding items to choose from. We ordered, The Wedge Salad (No Bleu Cheese), The Churrasco Steak, and Build Your Own Mac N Cheese with Scallions and Buffalo Chicken. The food was bomb and we even took the leftover Mac N Cheese back to the room hoping to save it for a late night snack! 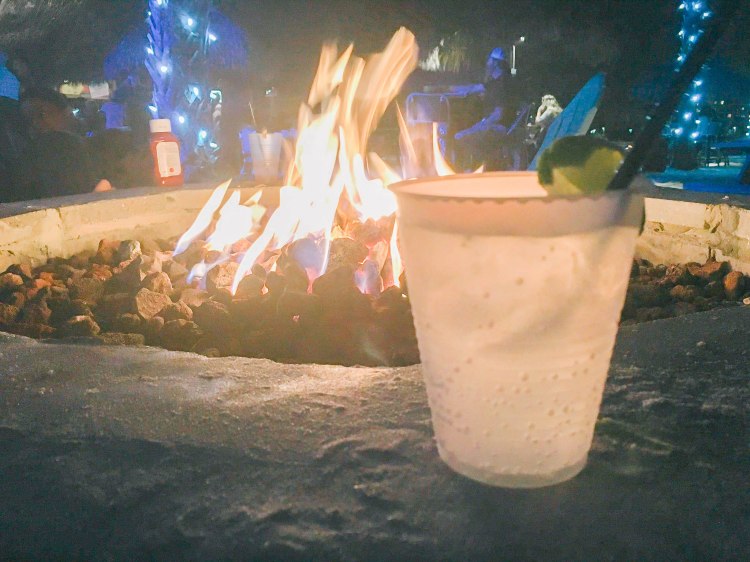 Later on, we called some friends and made the plan to head across the way to the neighboring, Whiskey Joe’s. They had some live music going and were stirring up quite the beach party. We walked in, grabbed a drink, and since it was cold, we took over a fire pit and set up shop for the rest of the night. The live music played on for hours as we hung out and enjoyed the beach bar evening around the fire hanging with friends. 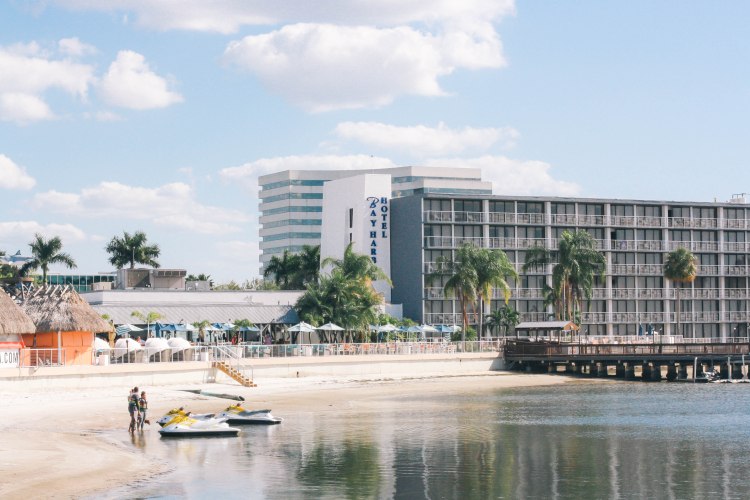 After a busy and very successful day, we headed back to our room to rest up before heading home on Sunday. We had a great time hanging at Beach Bar Restaurant and The Bay Harbor Hotel. It’s a perfect spot for locals to swing by for a bite to eat, some waterside fun, or even a Sunday concert. If you are traveling from out of town or have friends staying in town for an event or conference, it’s perfectly located near the airport and would be a great spot to stop in for a business trip!