Despite the weather hampering the final couple games, the inaugural Great Beer Challenge, sponsored by the Atlanta based Sweet Water Brewery, was a complete success! The aim of the event was to promote community, meeting your neighbors and local businesses while enjoying another Saturday in St. Petersburg. The day started at 12:30 at the registration table, my team composing of three friends was named “Blood, Sweat, and Beers” (Bad News Beers was already taken). Although we had no idea what we were getting into, from the outside we could see tents set up with local businesses, the really cool tye dye Sweet Water truck, and the awesome shuffleboard courts where the games took place. The location is home to the world’s largest and oldest shuffleboard courts, which added to the uniqueness of the event. Other teams dressed up in themes, masks, and even full costumes like Mario and Luigi!

Once we were registered, we filled up our cups with some delicious 420 Sweet Water beer, and began practicing some of the games while waiting for directions. The heat was definitely a factor in our consumption of cold beer, but the shade provided helped keep us somewhat cool. While waiting, there was an awesome DJ who provided entertainment with some of today’s music. Following the wait, a brief description of the rules set us up for a day filled with beer and games, which included Corn Hole, Flip Cup, Steinhold, Dizzy Bat Relay and Shuffleboard! Unfortunately, my team of college students had come off a little too overconfident and we were very surprised by how well the other teams were…at every event. 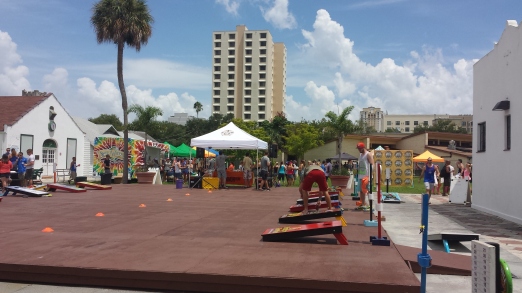 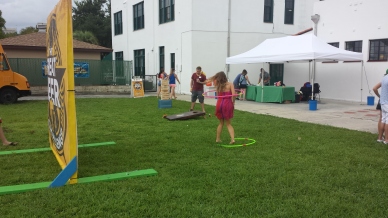 By the time the 4th event had come around, a storm cell had moved in, so we were to seek shelter for a short postponement of the games. This time allowed participants to meet new people, and yes, continue to drink some Sweet Water beers! Once the rain let up, it appeared that everyone was feeling just right and the games took a turn in becoming more interesting in the mud and beer consumption. 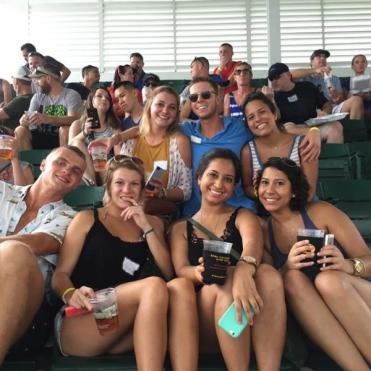 All in all the games were extremely fun, even though we may have come in last place, and we hope to see this happen again next year, maybe at a time when the weather isn’t so volatile.

Disclosure: I received team admission through a Great Beer Challenge partnership in exchange for my honest review. All opinions are my own.