When you look up the definition of the word “Haven” in the dictionary, you may see things like, “a safe or peaceful place, a sanctuary, a place of rest”. Well last weekend we had our first dining experience at Haven Tampa and let’s just say we found our new “SoHo Sanctuary”.

Ryan and I met up with two of our favorite SoHo girls who we always have a good night out with. If not brunching and pooling it up on a Sunday, the four of us like to find new restaurants to explore together. So this night, we took a chance and headed over to Haven. The former Sidebern’s restaurant, which one of the girls had visited had been completely transformed into this new concept restaurant that specializes in award-winning wines paired with charcuterie and a wide range of cheeses. 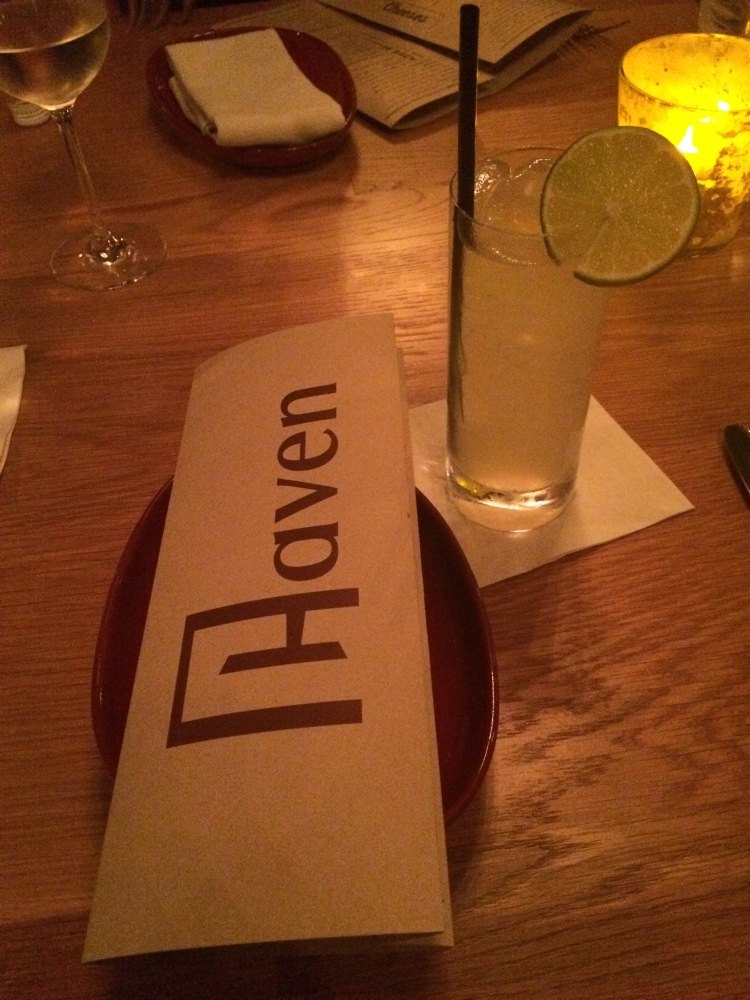 We began the meal by ordering some cocktails. The girls decided on a nice bottle of white wine to share. Ryan and I, as most would have predicted, began with a round of margaritas. What we didn’t realize when ordering and were intriguingly surprised by was the punch of smoky flavor that the margarita packed. When looking back at the menu, we realized that flavor came from the “smoked agave” that was used to sweeten the drink. It was definitely a different flavor than our typical margarita choices. For our second round, we went more traditional and replaced the smoked agave with the usual sweetener.

We then began our foodie adventure. Our waiter had explained that Haven is built on the concept of small plates that can be shared if you prefer. He suggested 2-3 dishes per person, but we weren’t trying to over indulge, so we discussed as a group and made our game plan. We decided to share a cheeseboard (with 4 cheese choices) and then we would each order 2-3 dishes per pair. The cheeseboard was really good. It was served with little pieces of bread, grapes, jam and honey.

Moving on to the dinner portion of the meal, we were charged up and ready to eat! I went for The Chicken Pastrami, which came with pretzel gnudi, swiss fondue, and crispy chicken skin. Pretzel gnudi is a soft pretzel ball covered in crushed pretzel pieces. The Skirt Steak, Ryan’s contribution to the meal, was served with shishito peppers (which are sweet not spicy), hickory salt, miso dijonnaise, and tomato bread. Tomato bread is basically bruschetta on top of a crostini. It was cooked perfectly and was a perfect portion for the two of us to share. We even had enough on our end to let the ladies try a bite or two.

The girls opted for the Goat Tacos. It came as two tacos filled with chipotle, cabbage, passionfruit guacamole and of course, goat. They said they were delicious and commented that they were a pretty decent sized taco, so the two were plenty. They also “splurged” for the Charred Shrimp. It came with pickled serrano peppers, chinese broccoli, and a miso yogurt. This was the only “problem” we encountered. We were a group of four and there were only three shrimp served in this dish. Luckily, Ryan doesn’t eat shrimp, so we made it work. We all agreed that it would have been great if there were more shrimp because we all really enjoyed the flavors of the dish.

For sides, Ryan and I settled on the Whole Roasted Cauliflower. It came in its own kettle with covered in shallots, ginger, ham, and goat’s milk beurre noisette. It was HUGE and really delicious! We loved the crips on top. The girls went for the Macaroni and Cheese, which is always changing because of the cheese used to make it each night. I stole a bite or two of this and it was really good!

We finished our meal and all agreed that the food we got was the perfect amount for the four of us. We felt comfortable, but not overly full. So, when we heard they have Bern’s Classic Ice Cream on the menu, we had to indulge. It is a vanilla ice cream with coffee and macadamia nut flavors. For people who don’t really do ice cream because we don’t drink regular milk…..it was awesome!

So we ended the night on a high note, making sure to snap a few pictures out front as we were leaving. All in all, dinner at Haven was a success. We tried a bunch of dishes and with the wide variety of menu options, we will have no problem going back to try and bunch more. Cheers!