As many of you know, Ryan’s birthday was last month. As part of his “birthmonth” celebrations (not really, but it did seem like we were celebrating for three weeks straight) we partied one Sunday Funday afternoon at Splash Sundays at The Epicurean Hotel.  After the daytime festivities came to an end, Allison, Ryan and I found ourselves sitting on the couch and VERY hungry. Fun fact about us: When we aren’t indulging on a trio dip and street tacos from Green Lemon, we love chowin’ down on some sushi. And that’s where the search began.

So, we were on the hunt for some sushi late on Sunday night. It just so happens we did some searching and it was the grand opening night of the Tampa location of Sushi Ninja. Located on Kennedy Boulevard right near Miguel’s, Sushi Ninja serves up a combo of Japanese and Korean food all under one roof. With their modern flair, the “ninjas” at Sushi Ninja have perfected their star throwing, tucking and rolling and judo chopping to put together delicious sushi combinations. We walked in not sure what to expect and were greeted by a live singer serenading patrons with his best vibrato. 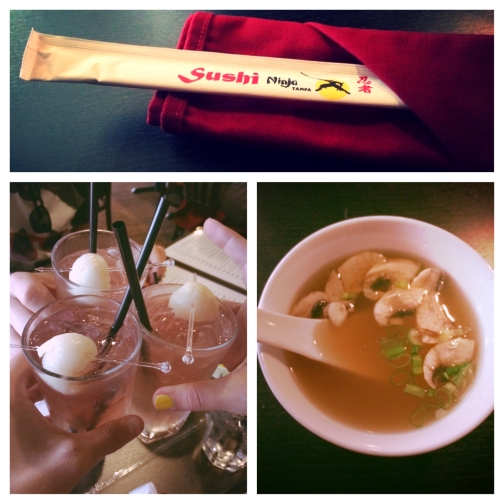 Once we got to our seat, we were told that as part of the grand opening, they were serving up some free lychee sangrias to celebrate. Obviously, we didn’t want to be rude, so we accepted the offer for the free cocktails and cheers’ed up to another great night in Tampa Bay. After looking through the menu, there was so much to choose from. I started light with a fresh, chicken broth soup and Ryan ordered a ginger salad.  So far… we were off to a fresh and authentic start! 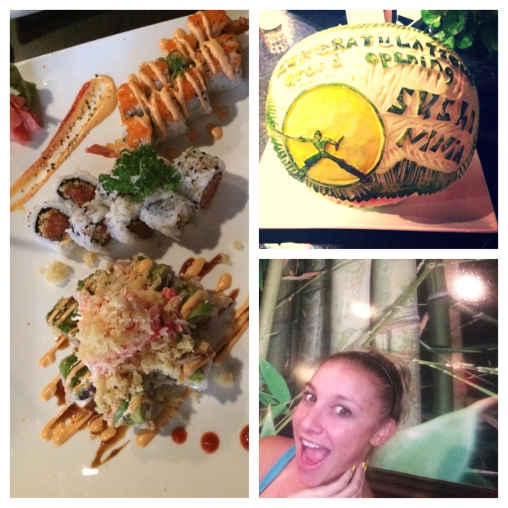 As we continued our eating tour of Sushi Ninja, we learned that Executive Sushi Chef, Mimi Kang, has been serving the highest quality of fresh sushi and sashimi at their Brandon location for over 13 years. We had finished our first course and ordered up some more food to enjoy. Ryan went for the Ninja Beef (love the name) and Allison and I went for sushi. I got the Shrimp Tempura and Spicy, Crunchy Tuna Rolls while Allison got the Volcano Roll. While we waited for the food to come, Allison commented on the HUGE mural behind us on the wall, so we obviously felt it would be the prime time for a photo op #bambooroom #sushininjaselfie. The food came pretty quickly and as you can see by the lack of photos, it was eaten so fast I couldn’t get a pic. I would take this as a definite sign of success. 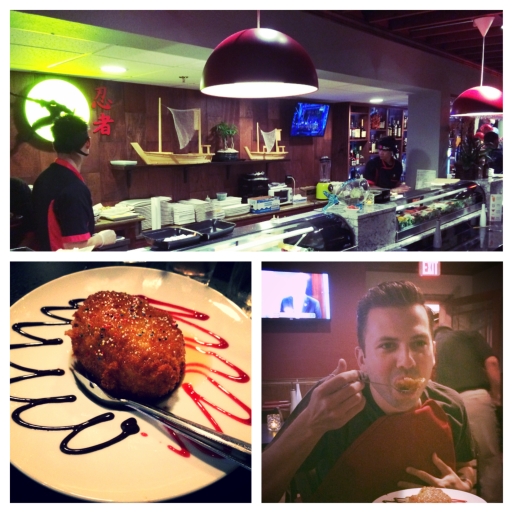 After dinner, we were planning on heading home, but couldn’t resist the offer of some of Sushi Ninja’s fried ice cream. After all, it was STILL Ryan’s birthday. So they brought out the fried ice cream, we serenaded him with some Happy Birthday and we dug right on in to that fried ball of deliciousness! 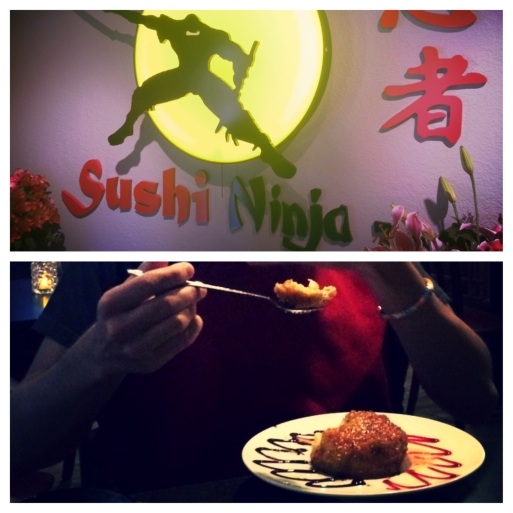 After the meal, we took a quick tour of the place and got to meet the owners. They were very excited to have us and were so overwhelmed at the response they got on their first day of business in South Tampa. The room we were in was relatively small, but do not worry, there is PLENTY of restaurant space for customers to enjoy the ninja awesomeness. So if you are on the hunt for some sushi in South Tampa, look no further than Sushi Ninja. You won’t be disappointed!