Another weekend, another festival (not that we’re complaining) and this particular festival  just so happened to feature two of my favorite things- wine & food (clearly I’m the PG-21 rated version of Julie Andrews. Raindrops on Roses? Get real) I am talking about the Tampa Bay Wine and Food Festival which was held at the Straz Center over the weekend. It featured the Southern Charm Wine and Food Gala and Auction on Friday night and continued into Saturday for the Grand Tasting. We were lucky enough to be invited out to both events and let’s just say I’m still coming off my wine buzz days later.

Friday night’s event was black tie optional and not wanting to be scrub status I had to make sure my outfit was acceptable. Therefore lots of outfit changes and roommate advice were experienced before I was good to go. Once decided a friend and I Lyfted over to the event. We grabbed our glasses and headed upstairs to the VIP area. First things first, get in line for a drink. Here is where I was confused, the first drink I had at the Wine and Food Festival was a margarita (I do love myself some tequila) While it was delicious I noticed throughout the weekend the event featured not only wine but some liquor as well. I guess wine isn’t for everyone…

We grabbed scallops from Publix, lobster rolls from Tampa Palms (and a member for the day card. 18 holes here we come!) cheese from Target (although it was frowned upon by some people- you know who you are) and much more. Now I’m not sure if I missed multiple food stations, but to be honest it didn’t seem like there was much to munch on. There was definitely plenty of wine to go around though. As we weaved our way in and out of the large crowd to the silent auction area we checked out the night’s prizes. Besides items you could bid on, there were a few vendor selling wine glasses and accessories and a band for entertainment. Leaving I wasn’t sure if I could do the whole thing again less than 24 hours later. But who are we kidding, I rallied like a champ.

Saturday was a lot more laid back, and way more comfortable in my sandals. Also, way more crowded. A few friends had purchased their tickets on Living Social a few weeks back so we headed over in a big group for a day of drinking and eating. Like I said, Day 2 was packed and it was almost uncomfortable trying to maneuver in the narrow spots but after a few glasses of wine we were making new friends in tight corners. Saturday’s event spanned an even larger area and seemed to have way more food. We were upstairs, then downstairs, there was even Jersey Mike’s serving food outside. 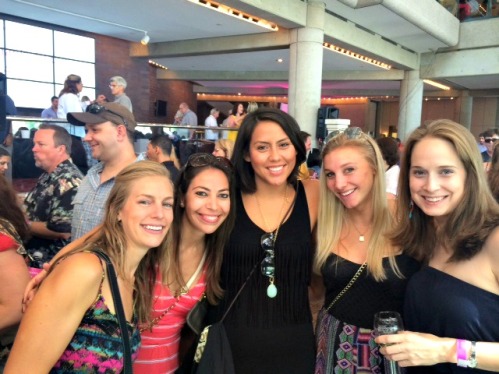 One thing I will say for this event was thank god it was inside. After being outside at events all summer it was clutch to be cool in the AC. Sure, we know it’s getting into fall but it’s still Florida people!!  Despite the amount of wine I consumed this weekend I still may go home and have a glass tonight. After all, I did find a few new favorites!