One of the perks of having 4 of us involved in the blog is that we usually have a partner in crime to hit events with, but last night I had to ride solo to the Lee Roy Selmon’s Summer Sizzle Food & Craft Beer tasting, and I didn’t hate it. Coming off the Melting Pot event I reached out to our new friends Carlos Eats and the Lechon Bros to see if they would be attending as well, never ones to miss an event, they told me I’d see them there. Woohoo!

Upon entering Lee Roy Selmon’s, located at 4302 W Boy Scout Blvd,I was warmly greeted and directed towards the tasting room. Here I was introduced to Jennifer Ulmer who does marketing for Lee Roy Selmon’s. She explained to me the courses and craft beers on the menu and which were part of their summer menu.  Before each course, Chef Michael from Lee Roy Selmon’s and Bruce Talcott, of Florida Ave. Ales took the time to explain each of the pairings. It was a much more intimate experience than the Melting Pot dinner as there were only about 10 of us but it allowed us all to interact and discuss the dishes and beer as we ate. 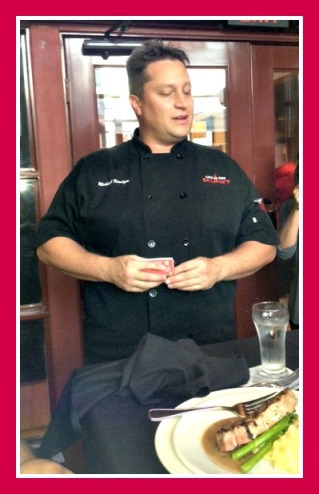 Course numero uno: smoked shrimp cocktail paired with Florida Ave. Blueberry. In true Never Have I Ever Tampa fashion- let’s start with the beer. I’m not one that really enjoys fruity beer, it takes a lot for me to drink a Blue Moon, and I can’t even begin to drink a Sea Dog Blueberry Ale at the Dubliner on a Wednesday night, but this blueberry beer was amazing. It wasn’t too overpowering and paired nicely with the smoked shrimp and Selmon’s BBQ cocktail sauce.

Moving right along… our next course was the Selmon’s Brother’s Wings with their Oklahoma sauce. Holy mother of god, this Oklahoma Sauce is insanely good. The wings were so tender the meat fell off the bones. They informed us that each restaurant has a smoker right in-house so they do their wings on location. And let’s be honest, nothing is better than wings and beer for game day, so pairing the wings with Florida Ave. Ale was like game day right on the table.

The third course was where things really took a turn for me. Not  that the shrimp and wings weren’t amazing, but this course really stepped up their game. We would be enjoying a smoked and fire grilled pork chop, with their smashed potatoes (made with sour cream, bacon, and cheddar jack cheese) and broccolini. With all these courses going on I was concerned about filling up before the desert course (and no one can stand in the way of a girl and her desert) but the portion was just right. As good at the pork chop was, the smashed potatoes were out of this world. Oh, and the green stuff on the plate was delicious as well.  This was the only course that wasn’t paired with a Florida Ave. Ale, it was paired with The Tampa Bay Brewing Company’s Redeye Ale. (no disrespect to them, but I was not a huge fan) it seemed as though the others at the table enjoyed it; to each their own.

I was most excited for our 4th course, the Smokin’ Summer Chicken Bowl paired with Florida Ave. India Pale Ale. Jennifer explained to me earlier in the night that this was one of their Summer Bowls they were debuting. They also have a Soul Good Pulled Pork bowl with tomatoes, rice, corn, avocado combined with a Hickory Chipotle sauce and cilantro, as well as a Smoked Shrimp bowl. When the bowl came out, it appeared to be an upscale version of Chipotle’s burrito bowl. As excited as I was for this course, I would have to say the pork chop with smashed potatoes was still my favorite. That is…. until we got to the 5th and final course.

Chocolate cake ya’ll. I feel as though I shouldn’t have to expand upon the words “chocolate cake” but I will, because I definitely need to tell you about the beer it was paired with; Florida Ave. Betchy Brown. First, let’s discuss the cake. I had tried to pace myself all night to prepare for this very moment, and when the time came. The cake was so rich and moist I was satisfied with just about 4 bites, and having it with the beer just added to my satisfaction. Bruce from Florida Ave. Ales explained that they had a naming contest for this brew and in the end Betchy Brown won because of the meaning of betchy, which he defined as a woman who had it all together. Being the amazing roommate that I am, I had them box up the rest of the cake to bring home to Rob (you’re welcome)

Once the meal was over we took the time to get in some final pictures and comments regarding the tasting. Besides the new summer bowls, Lee Roy Selmon’s also has tons of other promotions this summer. Be sure to check out their website to hear how your Kid’s Can Eat Free, $5 Nacho Night on Thursdays, Fantasy Football, Seasonal Drinks & Appetizers and their Victory Hour ($3 drinks and apps ya’ll: can’t beat that!)

All in all it was a great night, with great conversation, great friends and of course great food. Thanks Lee Roy Selmons! – Allison