We all know that Tampa is known for its amazing Pirate Fest called GASPARILLA! It is my SECOND favorite holiday after Christmas and the anticipation begins building come September! Each January, we have our wonderful pirate festival (which is basically an excuse for grown adults to dress like a jackalobe and drink until they can’t see straight).

Anyways, in our travels around town a few weeks ago, we stumbled upon a fun little event known as The Gasparilla Art Festival. This event is put on each year during Gasparilla season and is followed by a Gasparilla Music Festival as well.

It all started on an impromtu trip down to the downtown market. This market, very similar to the Hyde Park Market, invites guests to come walk around, take a look at the products that each booth has to offer and possibly enjoy a small sampling of some yummy treats.

As we made our way through the market, nothing really jumped out at us. We could hear the creepy yodels of a group of tween boys and girls singing on a small stage area.We continued walking passed booths that were selling lemonade, olive oils, different types of fresh bread and eventually ended up at this oasis:

We were immediately drawn to the awesome name, Disco Donuts. But what made me even MORE pumped about getting the treats was that it was easy on the wallet and you could have one and not clog your arteries with an over-sized portion size. We quickly realized we had to decide (as a team) what flavor we wanted. After mulling it over, I asked Terry what his best seller was and he said the “KC and The Cinnamon Band” was. We ordered up a small batch and watched in amazement as this small metal contraption in front of him began frying up the donuts like an assembly line! This was our end result, 6 delicious mini donuts that were cheap, yet SOOOOO DELICIOUS! 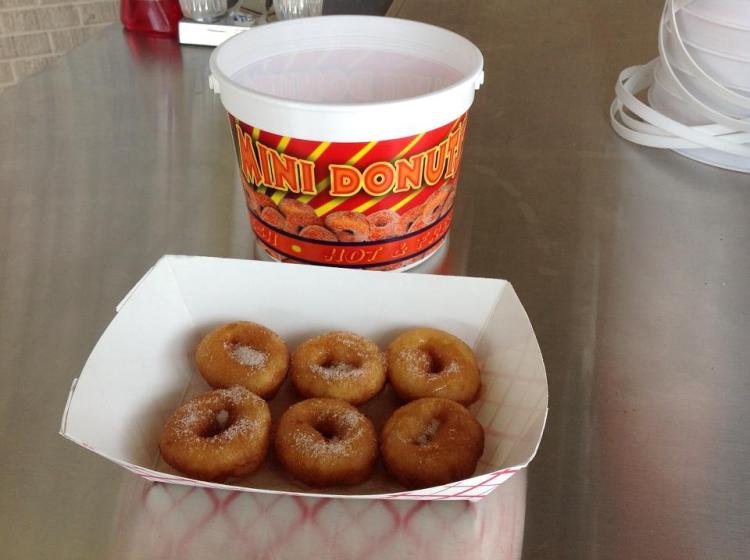 After enjoying the amazing treats, we made our way to Curtis Hixon Park for the Gasparilla Arts Festival. It was an abnormally cold day, but that didn’t stop Rob, Allison and I from getting ourselves a nice adult beverage. We sipped our brewskis and walked up and down aisle after aisle of artist tents. Each artist had a tent sent up, showcasing their art for the patrons of the event. What we really liked about the setup was that you were able to get up close and personal to both the art and the artist who created it. Our favorite art came from Big World Photo. Her art all depicted small figurines in some daring situations. For example, one of my favorites was a picture of a female figurine sitting at a bucket with a life-size batch of grapes in front of her. It was supposed to show “Wine Making.” It was soooo cool and we all said how interesting the art would be in an Ybor Cafe or Coffee House (here’s to hoping!). If it wasn’t SOOOO ridiculously windy, we probably would have stayed around longer and met with some of the artists, but it was just too brutal to bear! We all agreed that next year, we would be sure to dress appropriately and take full advantage of this great event in our humble abode, TAMPA!