So, last week was our friend’s birthday. His girlfriend wanted to throw him a little surprise partay on Friday night, so Rob, Ryan and I made our way to Harbour Island to meet up with the birthday boy at Sail Pavilion. Lucky for us, their was a small food truck rally going on, so we obviously took FULL ADVANTAGE of our dinner options. Rob and I opted for Jimmy Meatballs, an awesome meatball truck. After looking at the menu, and having a hard time deciding which flavor meatballs to order, we both went for the three ball sampler. It allowed us to order three different flavors, giving us more of a variety. From right to left, I chose the original ball (obviously), the korean bbq ball and the buffalo chicken ball. Rob opted for the buffalo chicken, sesame ginger, and the original.

Oh and by the way, Rob snagged himself a small fry for us to split. When they called for Rob’s order to be ready, everyone else was jealous of us because WE GOT THE LAST ORDER! They were totally worth it to. The fries come with some spices on them that made them so delicious! But, back to the balls…

We scarfed down our food in a few minutes, while also enjoying a Blue Point Beer from Sail Pavilion. After cleaning our plates, we both agreed that the meatballs were ALL delicious. Personally, my favorite was the korean bbq. Rob liked the buffalo chicken the best. The meatballs were moist, the sauces were all tasty and the added crunchies on top of my korean bbq ball sent me back in time to the 4th grade HAHA. The only criticism that Rob had on his choices was that he didn’t LOVE the cream cheese topping on the sesame ginger ball. All in all, we really enjoyed the meal and contemplated going back up for more. We practiced some self control and realized we would be better off later in the night if we stuffed our faces with Blue Points instead of meatballs (good decision in the end).

Ryan decided to venture off and try a different food truck, Two Asians and a Grill. Having a love for asian food and a longing for a trip back to Hong Kong, it was obvious that he would choose the awesomeness that is Two Asians and a Grill. After surveying his options, Ryan chose the fried chicken noodles. I only had a small bite in between him going to town on the plate, but I found them to be pretty tasty.  Ryan enjoyed his meal as well, but we did comment that the noddles used weren’t exaclty “Asian” noodles. They seemed to be more like a spaghetti, but it didn’t change the taste, so we didn’t mind! 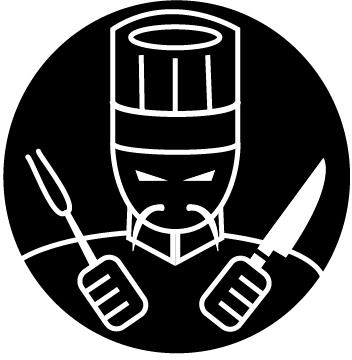 This is the logo for Two Asians and a Grill and Ryan and I thought it was pretty awesome! Side note: We bumped into a friend at the event and she told us she was recently at a wedding that this food truck catered, and that it was such an awesome way to end the night. That sounds pretty legit to me! Overall, it was a great night of beer, food, and celebrating, as we spent the night laughing on another great Friday night in one of Florida’s many hidden gems, Tampa!